The Gods of Cosmothea Part 3 of 4 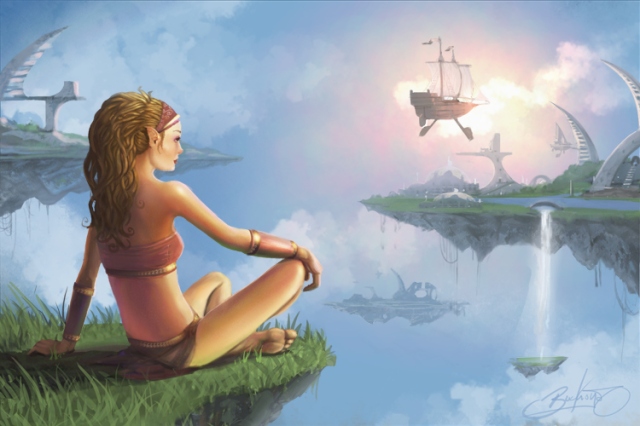 On Adara, Cathor and other worlds, Seth’s Brotherhood became very powerful. Seth’s sister, Mithra, the Sun Goddess and Holy Mother of Paragons, began anointing paragons to stand against her brother’s forces, in hopes of restoring peace in the land of mortals, blessing them with many powerful miracles. Then she lifted up her greatest champions on Cathor, paragons of pure heart, and blessed them with objects of power, and positions of prestige.

The Legion of Good was the first among them, great holy warriors, exemplary paragons, and although it was not Mithra’s intent, she found such actions rapidly increased the number of her followers as others hoped to be blessed like their brethren. And so the religion of Mithraism grew powerful along with her champions and slowly they managed to push back the tide of Seth’s militant brotherhood.

Seeing the impact Mithra had made by bestowing gifts upon her servants, many of the other gods followed suit, desiring champions and more followers, creating artifacts and other objects of power, but the One Above All was not pleased and continued to lift up not champions, but common, flawed mortals, without pomp and spectacle into influential positions. While the One Above All’s followers did great things in his name, the flashier, celebrated heroes of the lesser gods became legendary, their gods’ religions spreading far and wide.

The evil gods, conspired to outdo Mithra’s “blessings” and started boosting their own champions, conducting raids upon Mithra’s temples wherever they were built.

A time came when the greater gods grew concerned that the One Above All’s patience might be wearing thin, and realized their own quests for glory might not be in the best interest of the mortals whom the One Above All seemed to care so much about for whatever reason. Further, they feared the Infinitars and Eternals might carry the trend further still, as they had far fewer followers, and so they began meeting in secret to discuss the matter.

Forming the High Council of the gods, these greater gods, called High Celestials for they had each conquered a dimension and could bring about its full power to bear at will, did not consult the One Above All, nor invite the Illuminari nor the lesser gods to their meetings. They agreed to slow production of their artifacts and gifts to the mortals and regulate intervention, drafting the Laws of Limited Intervention, which they forced upon the lesser gods.

When all was in place, the High Council of the Gods revealed their plans. The lesser gods protested, but were not allowed to enter, much less speak at the High Council meetings. Ranos, the only Celestial other than Chronus to never have conquered a dimension of his own, loathed the High Celestials, but bid the lesser gods remain quiet for a time. The Infinitars and Eternals thought he was planning to betray them, and waited, but instead, Ranos was secretly gathering an army to conquer the Shadow Plane so that he too could become a High Celestial and sit on the council.

As for the Illuminarii, Kyara was still missing, Xokilar, returned from the dead, had gone off to investigate a magical phenomenon in Cosmothea, the dimension of magic, leaving only Zuledragar who never listened to them anyway. In fact, they were afraid of the dark illuminarii and wanted nothing to do with him. Zuledragar had grown quite talented at pitting the gods against each other and had even set Gyria against her own father, Lucifer, keeping him from being released when she could have intervened.

The High Celestials were either ignorant or unconcerned as they went about their business of monitoring the lesser gods to ensure the laws were followed, all the while finding clever ways of breaking the laws themselves. Their followers still ascended to positions of power on many worlds and gifts still found their ways into the hands of their champions.

Welcome to QT Games! Mission Never publish junk or waste people's time. Publish only high-quality fiction and games. 'Nuff said. Company Overview QT Games LLC was created to publish blended-genre (fantasy blended with sci-fi, etc.) fiction, board, card and roleplaying games for a discerning gaming community. Unlike most small press, we have very strict standards: Only pro writing, pro editing and pro art. That means that if we can't get it right, we find someone who can. We pay well for what we don't do in-house. We don't cut corners on quality. This means we stand to make less money than other small publishers, but that's okay with us. We value your time and money, so we're willing to take the bullet. We've designed a large number of games and written a pile of stories. Now we're polishing some of them and getting them out the door. 'Bout time, we know. Good stuff ahead!
View all posts by Bob Whitely/QT Games →
This entry was posted in Cosmothea and tagged Blended-genre, campaign setting, Cosmothea, fantasy, QT Games, ringworld, roleplaying, roleplaying game, RPG, science fiction, scifi. Bookmark the permalink.