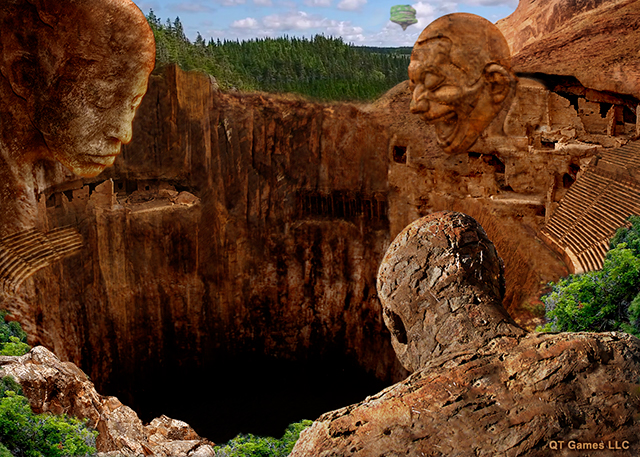 Evil, pain and suffering are hardly new concepts. They were part of Toonaria long before people started building first villages and then an entire city around a great pit on the Colossea floating island chain. Magic flowed from the pit and power shards were found in great number in the caves dotting its walls. The region was wealthy and many came to see the mysterious stone heads found there, and the great pit itself. But in recent times, the pit has become an ever present reminder that not all hold life dear on Toonaria.

Back then, the great stone heads overlooking the pit caused many to cast their own gaze upon the depths and speculate whether some powerful good or evil might one day rise up. When the truth was revealed, it changed life on the sky ark forever. Great champions have fought in the pit, and at one point the tech savvy traaku moved in and lit the place up with pyrotechnics to kick off and broadcast epic battles between terrifying titans of power. As the pit is not shallow, the traaku projected the battles high above the conflict using holographic projection. Magic powered Arcane Pictoriums (APs) received moving imagery of the battles in homes all over the sky ark. The traaku did not do all of this merely for financial gain, though no doubt that was a factor. Great mechs and bio-engineered beasts clashed in the pit for good cause, but perhaps I should back up a bit.

Traaku scientists have been monitoring the island chains—stability, gravitic factors, atmospheric conditions and such—everything they can to understand how Toonaria and the magnificent sky arks function. They also wanted to know more about the pit itself, and sent teams of scientists down into the pit to explore its depths, record the exotic creatures living in the caves and analyze the magic flowing like a vertical river through it. They discovered currents in which a person could float upwards or downwards from the surface to the distant bottom. And then they discovered it—the great obelisk buried below the pit in a hidden chamber. A great vault lie there as well, and held many secrets. It had been a great struggle to open the vault, and when they did, they found something so terrible that they quickly sealed it back up again.

As for the obelisk itself, others had been discovered over the centuries. Their purpose became clear in time. They maintained island stability—it was the obelisks keeping the islands from falling out of the sky. The one at the bottom of the pit was a Master Obelisk, responsible for controlling all the others on the island chain. Should a Master Obelisk come to harm, the entire, vast island chain would collapse, destroying millions.

Shortly after their discovery, Malistar, the Dark One revealed himself. He rose from the pit and confronted the traaku. The god-like being cursed the pit. From that point forward, the island chain of Colossea would remain afloat only if there were regular, public battles within the pit. Should the conflict stop for more than a week, Colossea would fall—a short distance if the absence of combat was short, farther, if the absence was greater.

No one had heard of Malistar and almost no one took the curse seriously until the island began to sink in the sky. And so the battles began. Robots were sent in to fight, but to no avail. The island continued to sink, revealing that Malistar’s curse required at least the potential for loss of life. The citizens of Colossea were desperate to find a way to break the curse, but none was found, and so the battles continued.

Eventually, a colosseum was built around the pit. With such colossal creatures battling, from time to time both the colosseum and city around it were damaged, only to be rebuilt. It was an exciting, terrifying time. In time, fewer and fewer came to such events, forgetting part of the curse that such battles must be public, witnessed, for Malistar wanted no one to forget the pain and suffering.

Sometimes only family members and close friends came out to watch, and those who were drawn in by the shocking, violent action. When the floating island chain continued to sink, the details of the curse were remembered and people came out in droves to watch, despite the safety concerns of flying shrapnel, cave-ins, and other side effects of colossal, megaton creatures going to battle.

In those early days, great beasts, monsters, war criminals and regular prisoners were forced to fight in the arena until public outcry deemed the act unethical. After that, only captured evil beasts were forced to fight, but capturing such creatures came with its own hazards, and the complaints continued. Prisoners were given a choice to reduce their sentences in exchange for volunteering to fight in the arena, but everyone knew that wouldn’t be a long-term solution. Regular citizens also volunteered to battle in the pit to ensure there were no prolongued gaps in the conflict. In some cases, citizens nobly sacrificed their lives in order to keep the island chain afloat. Even Toonarian superheroes from other realms have come to help save the island chain from destruction.

While individuals continued to battle in the arena from time to time, ultimately, the titanic mechs were brought in to fight in the Apocalypse Pit on a regular basis, most designed by traaku scientists. Each team piloted a mech and operated its weapons, sometimes representing a nation or corporation, and attempted to do battle without the loss of life. Lethal injuries still happened, however, but it was safer than previous methods. The public no longer comes out in any serious numbers to view the battles as the events were broadcast magically via Arcane Pictoriums (APs). This met the criteria of the curse without putting the audience in harm’s way.

One day during an AP broadcasted event, Malistar released Redd Syndrome over Colossea and the battle in the pit turned bloody. Since that time it has been difficult to keep the casualties down, as tainted combatants sometimes lose control, take things personal and fight for real. Such has been the situation at the Apocalypse Pit for a long time now.

These days, combatants train their minds, not just their bodies to be able to withstand the Red Syndrome, with some success, even as scientists continue to seek ways of minimizing or even curing Redd Syndrome, and ending the curse forever. And of course the threat of whatever’s in the vault remains an ever present threat as well. Additionally, there has been some concern that the battle in the pit might disturb the Master Obelisk itself. As such, a reinforced platform was built at the bottom of the pit, and the walls and floor have been reinforced as well, to minimize seismic disturbances.

To this day, the curse remains in effect and the battle continues. Such is life on Colossea, a realm far removed from the pleasant tea parties and afternoon naps of the gubblings and other tiny races living on the higher island chains.

Well, that’s all for this week, friends. The above, like the other posts in this series are overviews of material slated for further exploration and polish in setting books down the road, depending on fan interest. That said, let me know if you’ve been enjoying this series and if you’d like to see more. Thanks, and Happy New Year!

[The Apocalypse Pit is part of the Toonaria Campaign Setting ©2017 QT Games LLC. All rights reserve.]

Welcome to QT Games! Mission Never publish junk or waste people's time. Publish only high-quality fiction and games. 'Nuff said. Company Overview QT Games LLC was created to publish blended-genre (fantasy blended with sci-fi, etc.) fiction, board, card and roleplaying games for a discerning gaming community. Unlike most small press, we have very strict standards: Only pro writing, pro editing and pro art. That means that if we can't get it right, we find someone who can. We pay well for what we don't do in-house. We don't cut corners on quality. This means we stand to make less money than other small publishers, but that's okay with us. We value your time and money, so we're willing to take the bullet. We've designed a large number of games and written a pile of stories. Now we're polishing some of them and getting them out the door. 'Bout time, we know. Good stuff ahead!
View all posts by Bob Whitely/QT Games →
This entry was posted in author, blended-genre, Campaign Setting, Epic Destinies, fantasy, Fiction, Game Design, publishing, QT Games, Role-playing, Roleplaying, RPG, Sci-fi, science fiction, superheroes, Toonaria, Uncategorized and tagged Adventure, author, fantasy, fiction, Game Design, gaming, Magic, publishing, RPG, science fiction, scifi, Writing. Bookmark the permalink.