Taking Your Life and Your Work to Another Level: (Part 1)

Do you ever feel like you are all alone in the wilderness, fighting just to survive? Ever wonder whether you are heading in the right direction, doing things the right way and if you are getting somewhere even though no one else seems to notice, or worse—care? Whether all your efforts are going to be worth it? Have you been trying to slay the monsters in your life all by your lonesome?

What drives you on, relentlessly pursuing your dreams? And if you aren’t chasing a dream, why not? Well, until I hear back from you, I’ll dip into what has been keeping me going, why I’ve been spending time on the Cosmothea Blended-Genre Roleplaying Game and Cosmoverse Campaign Setting, writing stories, and why I keep working hard to improve a game most of you have never played.

Like the picture below, you can be sure there’s always more going on around you than meets the eye, and unless you insist on being alone, that need not ever be the case.

There are always people out there that share at least some part of your dream, your values, your interests. I’ll spend a few blog posts talking about all this and more, like why I made some of the design decisions I’ve made for both the RPG and the setting as well. If you haven’t found someone who will stand with you, don’t lose hope; don’t give up. They are out there and might be even closer than you think!

While I designed Cosmothea 1.0 – 3.0, plus a mini lite version all by myself, I tapped friends for their advice and had help with playtesting. When I began Cosmothea 4.0, I built a large team. Sadly, I had to disband the 4.0 team when the economy ate my wife’s job, and finances became rocky, but I built another team for the Kickstarter and we’re making great progress and I’m slowly building another team for Cosmothea 5.0, which I’ve made great progress on. I’ve also had good success working on teams for other companies, so I know it can work! 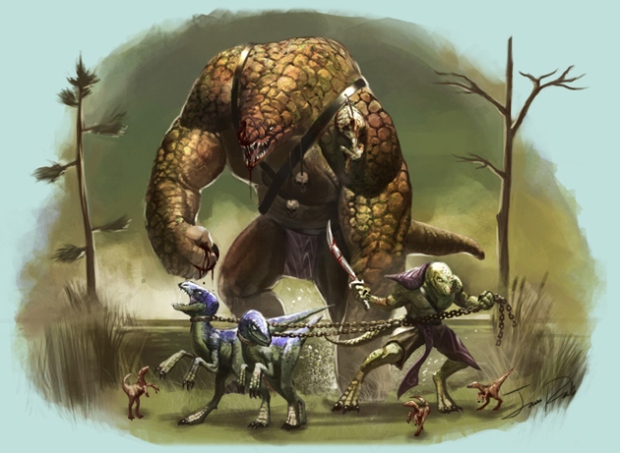 As for the picture above, I commissioned Jason Rainville to paint it for the RPG as I have a number of different species of lizardmen races and dinosaurs in the Cosmoverse. Do you think all these critters think alike? Nope! While you can’t expect all of your friends and associates to agree with you on every point of your dream/project, that doesn’t mean you can’t come to a meeting of minds on the important stuff and together create something that’s even better than what you could do on your own. Everyone has talents. It’s more a matter of setting aside egos, brainstorming how you will work together, not just blindly team up with someone. Some personalities work better together than others. Common sense, contracts, professionalism, regular, respectful communication, patience, a humble attitude, etc. will help your team succeed where others fail!

What keeps me going? I believe in what I’m doing. I’ve played a number of other roleplaying games (and own quite a few more) and I also own a pile of settings. I let the good ones inspire me to make sure my own rocks at least as much, and I let the bad ones inspire me to avoid falling into the same traps they did.

I’ve built a solid foundation, have listened to a ton of folks, researched what people say they like and don’t like, studied mechanics and created my own, believe that with God’s help I can do anything, and love writing and designing, so I’m not about to give up! I also know that there’s still room for a great game and a great setting, and that’s very encouraging! Look for the positives in your own dreams. Don’t ignore the negatives, but see if there’s something you can do to turn them around into positives as well! Find the flaws, fix ’em and move on. Don’t know how? That’s where the homework and teamwork come in.

One of the greatest things that ever happened to Cosmothea and the Cosmoverse was losing my budget! While I need money to publish, having no money put me into a position where I could take a step back, breath, and spend lots of time thinking about what I could do to make it work, to improve it, to take it to another level! When bad things happen, it’s often a perfect opportunity for personal and professional growth, changing directions, tackling a dream from a new angle, and next thing you know, something amazing can happen—if you don’t give up!

One of the nifty things that popped up while the budget was down was a better way to create characters in the game. One of the improvements was in the way I handle careers and races. In Cosmothea 5.0 you can now create nearly any sort of career path and race you can imagine. Sure, you could do that in 4.0 with some elbow grease, but now it’s a feature; it’s part of the game. And you can do it without a lot of headaches (there’s plenty of examples so you don’t have to create anything if you don’t want to). I felt this feature was important, as the Cosmoverse is so big, so I had to think bigger about variation among both careers and races across multiple galaxies and dimensions. While I’m still polishing things, it’s been easier to pull off than I imagined, and the payoff is quite exciting!

Be realistic, but think big! We’ll talk more on all this and other design decisions I’ve made along the way in Part 2. I’d love some feedback. This is your blog too, not just mine! Have a question or comment? I’m all ears!

Welcome to QT Games! Mission Never publish junk or waste people's time. Publish only high-quality fiction and games. 'Nuff said. Company Overview QT Games LLC was created to publish blended-genre (fantasy blended with sci-fi, etc.) fiction, board, card and roleplaying games for a discerning gaming community. Unlike most small press, we have very strict standards: Only pro writing, pro editing and pro art. That means that if we can't get it right, we find someone who can. We pay well for what we don't do in-house. We don't cut corners on quality. This means we stand to make less money than other small publishers, but that's okay with us. We value your time and money, so we're willing to take the bullet. We've designed a large number of games and written a pile of stories. Now we're polishing some of them and getting them out the door. 'Bout time, we know. Good stuff ahead!
View all posts by Bob Whitely/QT Games →
This entry was posted in Cosmothea, Cosmoverse, Encouragement, Game Design, Hope, Life, Roleplaying, RPG and tagged Adventure, Blended-genre, campaign setting, Cosmothea, Cosmoverse, fantasy, fiction, Game Design, hope, Multi-genre, QT Games, Role-playing, roleplaying, roleplaying game, RPG, scifi, superheroes, Transparency. Bookmark the permalink.

2 Responses to Taking Your Life and Your Work to Another Level: (Part 1)